I surprised even myself by taking my daughters, two avid Beliebers, to the Justin Bieber concert at the FNB Stadium, Soccer City, on Sunday 12th May. Happy Mothers’ Day. I would never have gone to the concert if my daughters were not real fans of the boy wonder and it was quite an eye opener to see how many adults were clearly there without children. Unless they braved letting their kids go down into the standing area or golden circle, where Bieber Fever reached volcanic proportions – reports of teens in Cape Town scratching and kicking and fainting had not gone unnoticed in my house and there was no way we were going to be anywhere but seated.

I must say, it was not without a little anxiety that I ventured out to the concert. I would never have been brave enough if my good friends and their kids weren’t going with us. We arrived at the stadium and parked far to avoid a traffic jam later. We could have saved ourselves the walk – it seems most concert-goers were dropped off by their parents.

The queues to enter the stadium were quick and manageable, probably because we hadn’t spent the whole day waiting in them like some young fans hell-bent on getting right to the front. There were reports about some fans so devout that they had camped out since the night before, when the Bon Jovi concert was on. Bizarre! We made our way to our seats high up in the heavens of the stadium and thanked Big Concerts for the big screens. We had been lucky to secure seats, considering the concert had sold out in a matter of hours. Chiano Sky was singing by the time we found our seats. She sang well, but I wasn’t mad about her fake American accent saying how “Awesome!” the audience was.

Local twins Locnville took to the stage at about 6 and managed to warm up the crowd with some hard-hitting beats and well-known radio hits. While the general excitement continued to rise, I continued to feel a little anxious about a few things – would the ear plugs I’d inserted in my children’s ears be sufficient to protect their young ears from the damage of gazillions of decibels of girl-screech? Would Bieber appear on time? He’d apparently been almost 2 hours late in London, and the following day was a school day! Would he lip sync or do something else intolerable and ruin my babies’ image of him? Would his cronies chose my child as the One Less Lonely Girl and disappear with her for half the concert? Would my girls manage the disappointment of not being chosen? 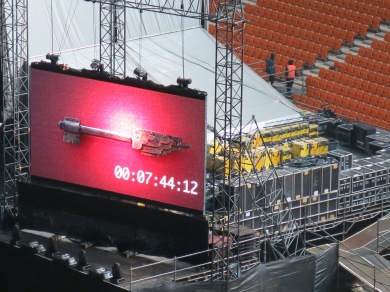 I needn’t have stressed about anything. At 6.50, a giant countdown appeared on the big screen and the fever started to reach its pitch. As every minute passed, the girls screamed. And then pandemonium – Justin Bieber was in the house! At exactly 7pm, as the countdown ended, the show began. The screaming was deafening and I was very grateful for the earplugs. Bieber pumped out his hits, with strong backing vocals and supported in every lyric by the audience. He danced through each song – slick choreography always, and every statement between songs seemingly scripted. He showed off his skills on the piano and the drums. He sang songs from his first album (released when he was only 15) – vocals adapted to accommodate his newly-broken voice and he sang songs from Believe, acoustic songs and songs with the full treatment. He teased the crowd with new songs. He had spectacular lighting and fireworks.

His songs are good pop songs. Mostly they are about love. He’s managed to keep his lyrics relatively clean, despite his alleged naughtiness off stage. And I’m actually not inclined to believe all the sensationalism spewed out by the media about this boy – he’s a 19-year-old with time and money. What has been reported as Bieber on the road to rehab appears to me to be ordinary behaviour for a young man. And he repeatedly sings or tweets messages like, “I’m telling you, people. Everyday we wake up is another blessing. Follow your dreams and don’t let anyone stop you. Never say never.” I know, his grammar isn’t great. But I’d rather my children listen to messages like this than some of the angry or blatantly sexual messages many young pop stars spew.

I was left impressed by the spectacle but not blown away. But in my eyes, Bieber did two things that night, at the last concert of this leg of his Believe tour, that redeem him in my eyes: When a scuffle broke out after he had thrown his jacket into the mob (“I won’t be needing this”), he delayed the start of the next song to step out of character and tell the squabbling fans to stop fighting. They continued and Bieber spoke directly to the jacket grabbers. “You! Yes, you holding the jacket. It’s yours.” Then he returned to his seat and did a very funny impression of two people going, “It’s my jacket”, “No, it’s my jacket!” I think the whole incident showed character. The thing is, this is the kid who has nearly 40 million followers on twitter. He is powerful. I’m pretty sure he could convince his fans to do anything. And I’m impressed that he isn’t using that power to breed negativity.

The other thing that he did which impressed me probably made most of the 95 000 people in the audience cry a little – he brought his mother on to stage and serenaded her as the One Less Lonely Girl – it being Mothers’ Day and all. Good boy!

My children were in their element to see their idol in the flesh (albeit through binoculars, because we were so far away!). I was impressed by the organisation and the professionalism of the show. I was relieved that the show ended by 9 and we were all home in bed by 10. And I must say, when he stripped off his t-shirt and revealed his not unattractive body, I, too, got a little Bieber Fever and didn’t even worry about the sexualisation to which my children were being exposed. It was mild. At least they’re not huge Rihanna fans or I would have to put my foot down.

The Monday morning school run was a little slow and our ears still rang for a few days, but I am pleased to report that my children’s first big concert experience was an excellent one. I hope their future music experiences are equally satisfying to them (and I hope they start liking some grungy folk-rock music in the near future).